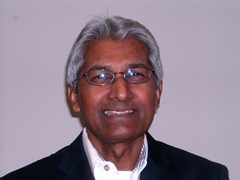 Dr. Eddie Bhawanie and his wife Angela are originally from Trinidad, in the Caribbean. He and Angela, immigrated to the United States, and have been living in the United States for over twenty-nine years. They have been married for thirty-two years, with one son to their union, Edward. He is married, and he and his wife Whitney currently, live in the Atlanta, area.

Dr. Bhawanie completed his primary education under the British system of education in Trinidad, and graduated. He did post-graduate work under the United States system of education. He holds a Bachelor of Arts degree in Biblical Studies, a Masters of Arts degree in Church History, and a Doctor of Philosophy (Ph.D.) degree in “The Philosophy of Christian Thought,” from The American University of Biblical Studies (AUBS), in Georgia.

At part of his training and education, he attended The Southern Christian University, in Alabama. He is a former Associate Professor of New Testament studies at The American University of Biblical Studies.

Dr. Bhawanie has traveled in the United States, and to many countries around the world to teach, and advance, and defend the Historic Truth-claims of The Christian Faith—with all its Substance, and Content. There is nothing more basic, and nothing more practical than the basic conviction, and knowledge that there is revealed Truth, (and absolutes) in the Bible–which can be known!

Because The Christian Faith, turns on Content; The Person Christ, and His objective, decisive victory over all the powers of darkness, and evil which He won at the Cross, and in His resurrection form the dead, --this Gospel Message must be offered with the Personality of The revealed God—through Jesus Christ, and must, therefore, be presented as: the only hope, the only cure, and the only solution for man’s sin, shame, scorn, and true guilt! What is the alternative?

When Man turns away from God’s absolute Truth, and the Gospel message of Christ; then, Man lives with meaninglessness, and mindlessness, and Man faces the ‘hell of alienation’ separated from God!

The Defense of The Christian Faith, and the Ministry, and Mission of Jesus Christ consist of the following:

(i) Present the Biblical facts of the Truth-claims of Christianity as rooted in the flow of history.

(ii) Analyze and respond to the dominant ideas in Western thought and culture, and give the alternatives stated in the Truth-claims of the Christian thought-forms. It is true, that all that most people can hope for in life are some passing amusements, some lustful gratifications of the senses, (and death)? This is the final reality of all those who seek to discover their true condition through their senses, and through natural reason—without any transcendent knowledge.

(iii) Push people to discover the logical ends, or the logical conclusions of their own thinking—without God’s revelation. In so doing, they will soon discover that there is tension in their belief system, and that they cannot live consistently with their conclusions.

(iv) Ask, what is the implication of the teachings of Jesus Christ in the life of the follower of Christ? How are they to live and conduct themselves in this world? This is also an imperative!

Dr. Bhawanie, currently serves as the Director of the Research Center for Apologetics, International. RCAI, is the research division for 317Ministries.net.

All the intellectual property for this Ministry is Copyrighted under: The Research Center for Apologetics, International, (RCAI).

Dr. Bhawanie, and his wife live in Stone Mountain, Georgia.